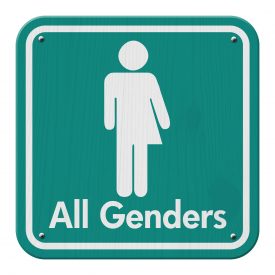 The U.S. Court of Appeals for the Fourth Circuit ruled last week that a Virginia county school board violated federal law by not allowing a biological female who identifies as male to use the boys restroom at school. In a 2-1 ruling, the 4th Circuit sided with former Gloucester County High School student Gavin Grimm by finding that Title IX and the Equal Protection Clause of the Fourteenth Amendment protect transgender students “from school bathroom policies that prohibit them from affirming their gender.”

The case of Gavin Grimm has been going on for five years now. It began when Grimm, a biological female who began expressing his identity as a male in high school, began using the male restrooms at Gloucester County High School with the principal’s permission. Parents and other concerned adults contacted the school board, which then adopted a policy requiring students to use restrooms matching their biological sex. The school also took steps to construct private, single-user restrooms. This accommodation, however, was not satisfactory for Grimm, who sued the school board for discriminating “based on sex” (a potential violation of Title IX) and for treating him differently than other “men” (a potential violation of the Equal Protection Clause). Grimm later amended his complaint to include the school board’s refusal to change his sex designation on school transcripts he requested for college.

Title IX prohibits discrimination in federally funded education on the basis of “sex,” but allows for “separate living facilities for the different sexes,” including “toilet, locker room, and shower facilities.” By relying on the commonly accepted definition of “sex,” the school board argued its actions did not violate Title IX because it did not prevent Grimm from accessing facilities that correlated with his sex. The school also went so far as to accommodate Grimm through the construction of single-user restrooms. As 4th Circuit Judge Paul Niemeyer points out in his dissent, “The law requires no more of [the Board].” The Board also argued that its actions did not violate the Equal Protection Clause, because Grimm, a biological female who identifies as a transgender male, is not “similarly situated” with other biological males.

A district court, however, ruled in Grimm’s favor, and found that both of these laws were violated. The school board then appealed to the 4th Circuit, whose ruling was released last Wednesday. The majority ruling, authored by Fourth Circuit Judge Henry Floyd, references the U.S. Supreme Court’s recent Bostock v. Clayton County ruling, which essentially redefined “sex” in Title VII of the Civil Rights Act of 1964 to include “sexual orientation” and “gender identity.” The 4th Circuit notes, “Many courts […] have held that various forms of discrimination against transgender people constitute sex-based discrimination,” because these policies rely on “sex stereotypes.”

As the Daily Signal observed in its article on the 4th Circuit’s ruling, the majority opinion reads like “a transgender manifesto,” and is yet another instance of justices legislating from the bench. “Neither the 14th Amendment nor the Bostock ruling requires, let alone justifies, this activist ruling from the 4th Circuit,” responded Ryan T. Anderson, senior research fellow at The Heritage Foundation.

The 4th Circuit majority also expressed significant bias and an apparent desire to craft policy, not interpret the law, with phrases like “Just like being cisgender, being transgender is natural and not a choice.” It even goes so far as to say, “The proudest moments of the federal judiciary have been when we affirm the burgeoning values of our bright youth, rather than preserve the prejudices of the past.”

But as dissenting Circuit Judge Paul Niemeyer rightly points out, “Judicial reasoning must not become an outcome-driven enterprise prompted by feelings of sympathy and personal views of best policy.” It is not a court’s job to craft or change policy. “The majority opinion devotes over 20 pages to its discussion of Grimm’s transgender status, both at a physical and psychological level,” continues Niemeyer. “Yet, the mere fact that it felt necessary to do so reveals its effort to [a]ffect policy rather than simply apply law. […] We are commissioned to apply the law and must leave it to Congress to determine policy.”

It is unclear at this point what the full ramifications of this ruling will be, but North Carolina will likely be impacted, because it falls under the jurisdiction of the 4th Circuit. NC Family will continue to keep you updated as this matter develops.