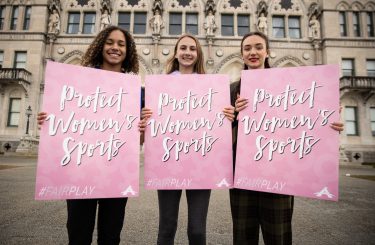 Three female high school track athletes filed a federal suit yesterday against the Connecticut Interscholastic Athletic Conference (CIAC) for a policy that has allowed biological males to compete in girls’ sports. Selina Soule, Alanna Smith, and Chelsea Mitchell have all lost medals and advancement opportunities in track to biological male athletes who identify as females. Our friends at Alliance Defending Freedom (ADF) are representing the girls and their mothers.

Since 2017, the CIAC has allowed males to compete in girls’ athletics if they identify as female. According to ADF, in track competitions, “two male athletes identifying as female have dominated the field, winning 15 women’s track championship titles since 2017.” These two males also now hold 17 individual women’s meet records in Connecticut.

Due to this unfair policy, Soule, Smith, Mitchell, and ADF submitted a complaint about this CIAC policy to the U.S. Department of Education’s Office for Civil Rights in June 2019. Their specific complaint was that the policy violated Title IX, a federal law passed in 1972 that “was designed to ensure that women and girls have equal opportunities in education and athletics,” says Denise Harle, legal counsel for ADF. Harle joined NC Family on our Family Policy Matters radio show to discuss this complaint in 2019. “This is destroying nearly 50 years of advances for women under Title IX. Women fought long and hard to be given those equal opportunities and to have discrimination eliminated.”

“No one doubts that top male and female high school athletes are equally committed to excelling in their sport, and train equally hard,” the June 2019 complaint said. “Yet boys and men consistently run faster and jump higher and farther than girls and women.” In August 2019, the U.S. Department of Education’s Office for Civil Rights agreed to investigate the athletes’ allegations of illegal discrimination under Title IX.

This complaint investigation is ongoing, but “with time running out on the girls’ high school careers, it is now up to the courts to restore a fair playing field in Connecticut,” says ADF. The suit filed yesterday asks for a declaration that the defendants—Connecticut Association of Schools—have violated Title IX. It also seeks injunctions prohibiting the schools from allowing males to compete in women’s sports, and requiring them to correct and “to remove male athletes from any record or recognition purporting to record times, victories, or qualifications for elite competitions designated for girls or women.”

ADF attorneys have also asked the court to stop enforcement of the CIAC’s policy while the lawsuit moves forward. “Girls deserve to compete on a level playing field,” says ADF legal counsel Christiana Holcomb. “Forcing them to compete against boys isn’t fair, shatters their dreams, and destroys their athletic opportunities.”