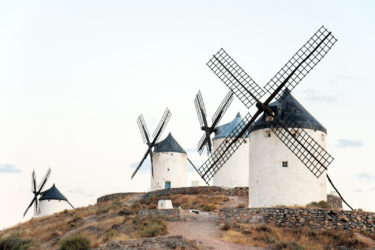 In one scene of the 17th Century Spanish novel, Don Quixote, the protagonist hastily prepares for battle when “thirty or forty hulking giants” appear on the horizon, some with “arms well nigh two leagues in length.” The tense moment takes a turn when Quixote’s sidekick Sancho reassures his master that the giants he has imagined are merely a series of windmills off in the distance.

Much like Sancho, NC Family has worked with supporters over the past year to convince our state’s leaders that reports of dire economic harm to our state due to the passage of House Bill 2 are ill-founded perceptions and not reality. The evidence became clearer when Site Selection Magazine released its “2017 Prosperity Cup” ratings in early May, again listing North Carolina as the top state in the nation for economic development. This should come as no surprise, since we topped the list in 2015 and tied Texas for the top spot in 2016. Moreover, our status as one of the best states in the nation to live, work and raise a family continues to be touted by Forbes, Chief Executive Magazine, CNBC, and U.S. News & World Report, just to name a few.

So why did our Republican-led General Assembly strike a deal with newly elected Democratic Governor Roy Cooper to pass a bill at the end of March to “repeal and replace” our state’s much discussed “bathroom bill”? Reportedly it was to appease groups like the NCAA, ACC, NBA, and select business interests, who threatened to boycott North Carolina if our lawmakers didn’t repeal the year-old law, which these groups claimed was discriminatory.

A close-up look at the bill reveals a far different picture, however. HB2 established a statewide standard for accessing multiple occupancy bathrooms, showers, locker rooms and changing rooms in public after the Charlotte City Council “went rogue” in February 2016 and attempted to give men a free pass to enter women’s facilities across the city. HB2 directed that entry into public bathrooms and other intimate facilities should be determined by an individual’s biological sex, not a subjective measure like an individual’s self-determined “gender identity.”

HB2 also established a list of protected classes in employment and public accommodation laws and reiterated that the General Assembly, not hundreds of local governments, should set these classes. Like similar laws in 28 other states and the federal government, HB2 did not include “sexual orientation” and “gender identity,” which have been used in other states to attack and punish Christian businesspeople who were simply trying to live their lives and operate their businesses in accordance with their deeply held religious beliefs.

Regardless, opponents of HB2, led by LGBT (lesbian, gay, bisexual, transgender) activist groups, their allies in the business and entertainment arena, and many in the media who front their cause, worked to paint a very different picture—one complete with massive giants on the horizon bent to wreak economic havoc on our state. Front page articles, editorials, and commentaries were full of rants about the supposed harm HB2 was doing, while stories about the state’s booming economy, record tourism, and top business ratings, were buried in the business pages and given short shrift on the nightly news.

Like Don Quixote, many of our state leaders focused on the alleged economic doom, and signaled surrender when long shadows cast by perceived giants in the distance grew closer. They wrote a bill, House Bill 142, which repealed HB2 but also reinstated enough of the prior measure to win a majority of votes in the State House and Senate.

In essence, the new bill prohibits state and local governments from regulating access to multiple occupancy facilities but fails to establish a clear statewide access standard. The state now defaults to existing indecent exposure and peeping statutes, and a 2009 N.C. Court of Appeals decision, which found a teenage boy guilty of criminal trespassing for entering a girls’ locker room at school. In addition, HB 142 prohibits local governments from regulating private employment practices or public accommodations until December 1, 2020 (just after the next gubernatorial election), meaning the issue will come back around again in three-and-a-half years, if not before.

House Bill 2 was a commonsense law designed to address critical matters of privacy, safety, dignity and religious liberty for all North Carolina citizens. The claims of economic harm just don’t ring true, as is evidenced by our state’s most recent rating as tops in economic and business development. Instead of “tilting at windmills” like Don Quixote, our state leaders would have done far better to examine the reality of the situation and make decisions based on facts, not misguided perceptions.